Proof of a Lifetime of Being Bullied By Major Entities!

About Us: SWP, LLC

Power in Numbers Exposed as Bullying

Online Course: Learning the Business Side of the Music Business!

Your Rights Can Be Deprived!

Below is a copy of the Complaint of Judicial Misconduct recently filed in 2015 (which includes background summary). I appreciate your discretion in protecting confidential information. I am seeking legal representation with regards to my allegations involving Dekalb County, the courts in the Northern District of GA and the COA-Court of Appeals.
Please take the time necessary to review my requests for assistance and let me know whether you or your firm would be willing to consider assisting or providing proper representation.
I have reached out to one of the legal aids organizations but in spite of ‘obstruction’ and many other unethical behaviors…some have attempted to use the statutes of limitations to dissuade even though the laws clearly state ‘statutes of limitations are not applicable. I may not be an attorney but like many others, I love reading and studying case laws and the constitutional laws, etc…
I am constantly misrepresented by those who are in a position to thwart justice and I do not have to tell you how people rally against you when suing governmental agencies; such as, the police. The first thing that is said is, “It’s YOUR tax dollars…” No one realizes that this only supports and condone continued civil rights violations.
Although I do not live in each horrible moment, I have been subjected to continued loss of enjoyment of life, loss of employment, loss of residences, physical pain, mental suffering, grief, anxiety, humiliation, rape, and emotional distress.

I have been told that I am in the wrong country. I was told that I blamed the wrong people for my copyright infringements. It has been implied that I am the reason people have been negatively impacted: yet, I received no communication or explanation – just blame.

Many blame ‘my situation’ on racism and sexism, while ‘my public’ has mocked, harassed and laughed while making it a point to imply that both; blacks and whites have united in denying any resolution due to possible violence stemming from onset. For decades, I have been told that nothing will ever change and that I should kill myself.

Every reason that can be thought of to induce public’s support in denying me resolution and some have even gone so far as to spread vicious rumors of me being a child molester (which is a lie).

I am only guilty of attempting to exercise my civil and human rights that apparently that a lot of powerful individuals feel that I am not supposed to have because others are more popular! I have always worked, legally protected myself and secured proper documentation when conducting business.

Again, I recognize that this is an extremely difficult task but I have faith that this can be remedied.
Thank you for your consideration,
Tiwanda Lovelace

I have also copied each page of the COM: Complaint of Misconduct  if the PDF Embedder Plug-in fails to load properly! 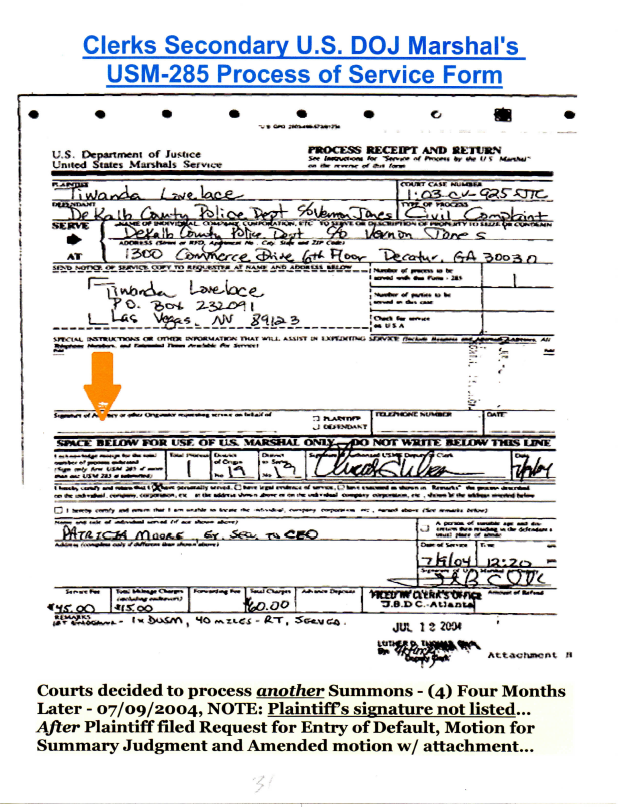 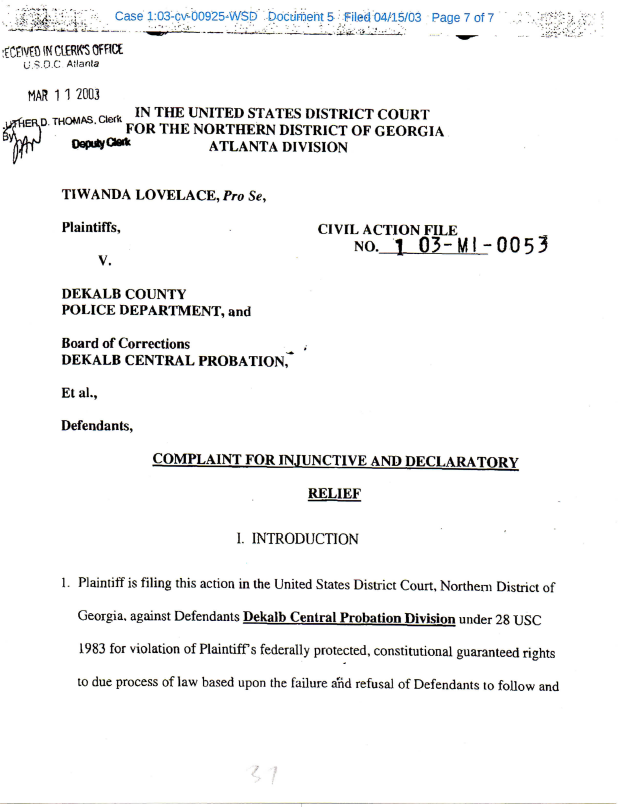 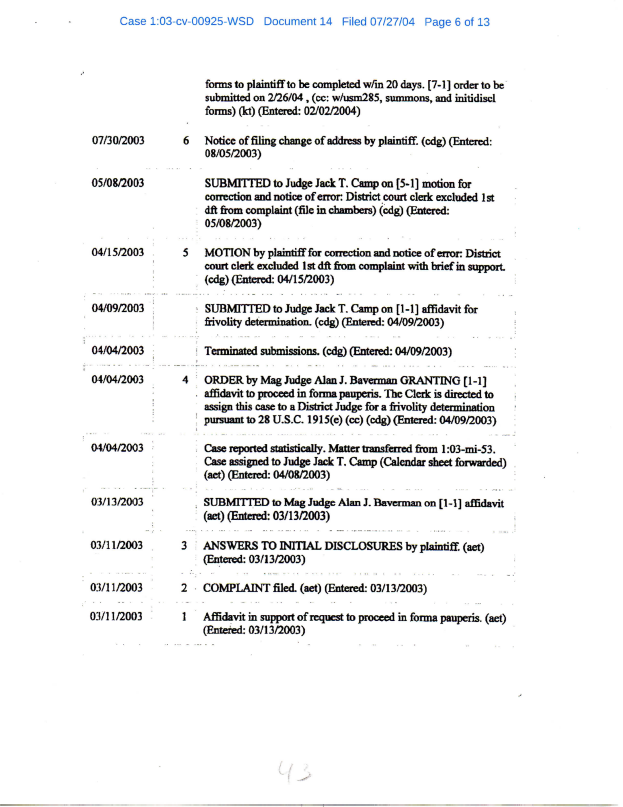 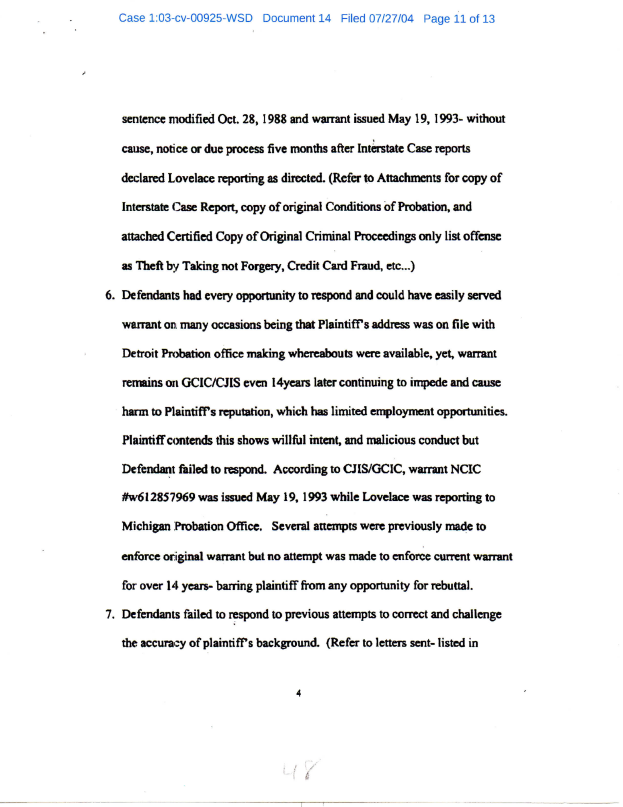 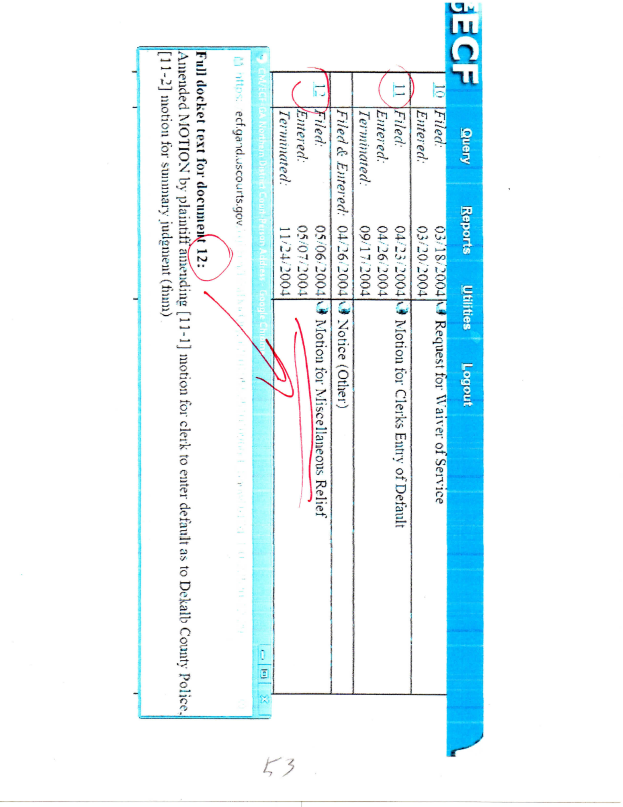 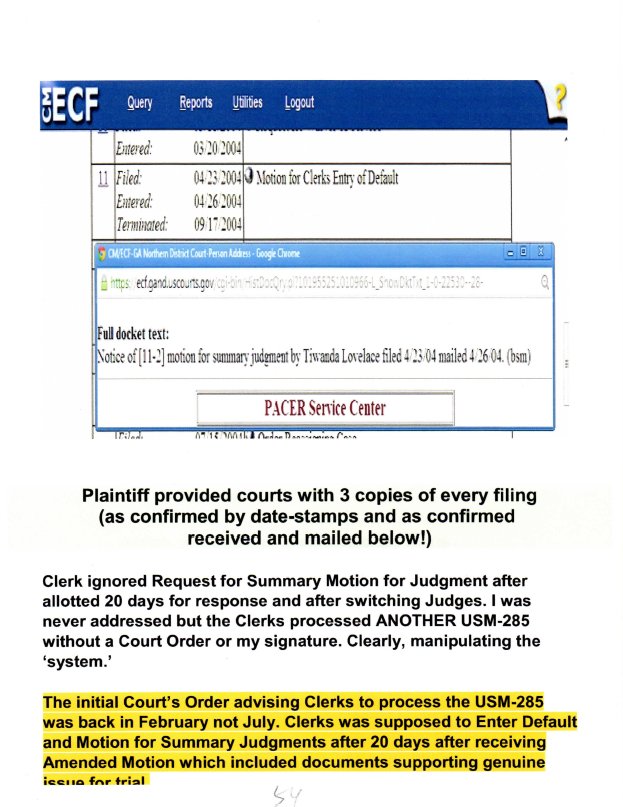 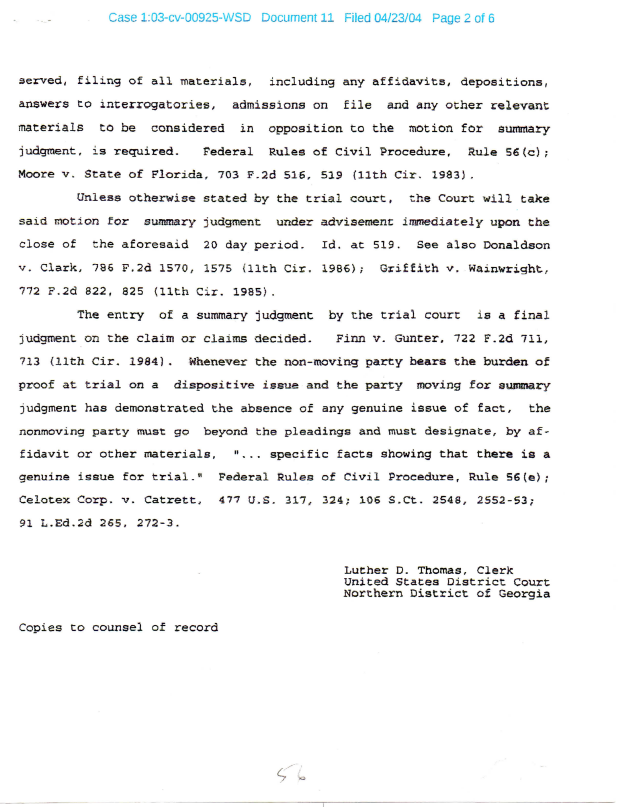 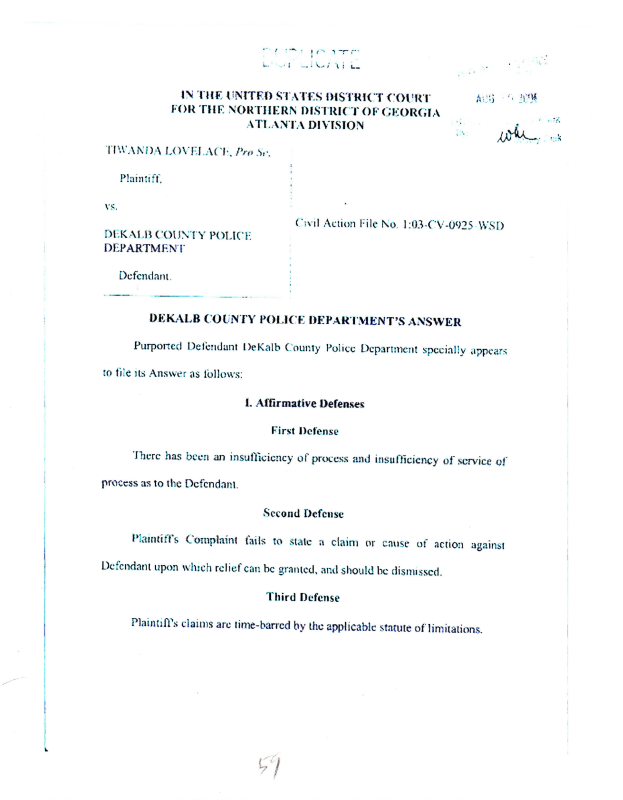 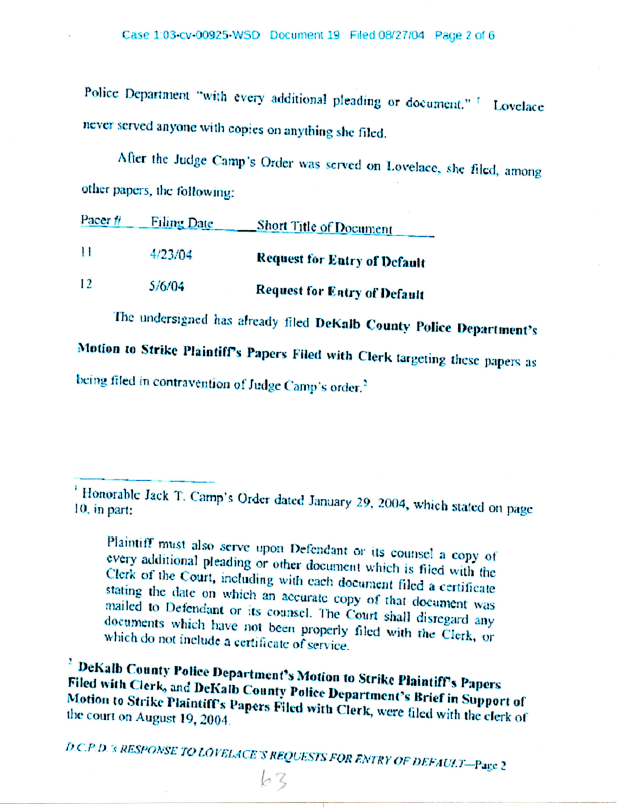 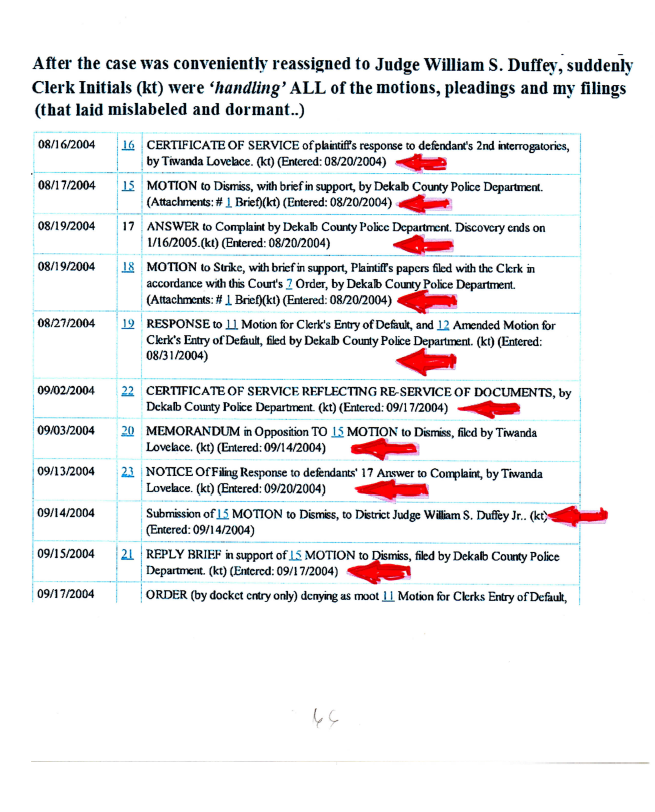 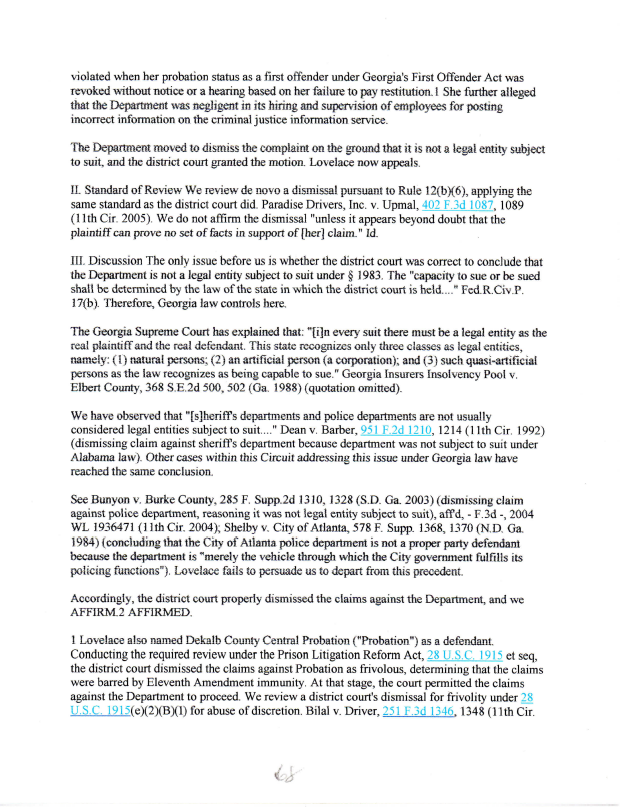 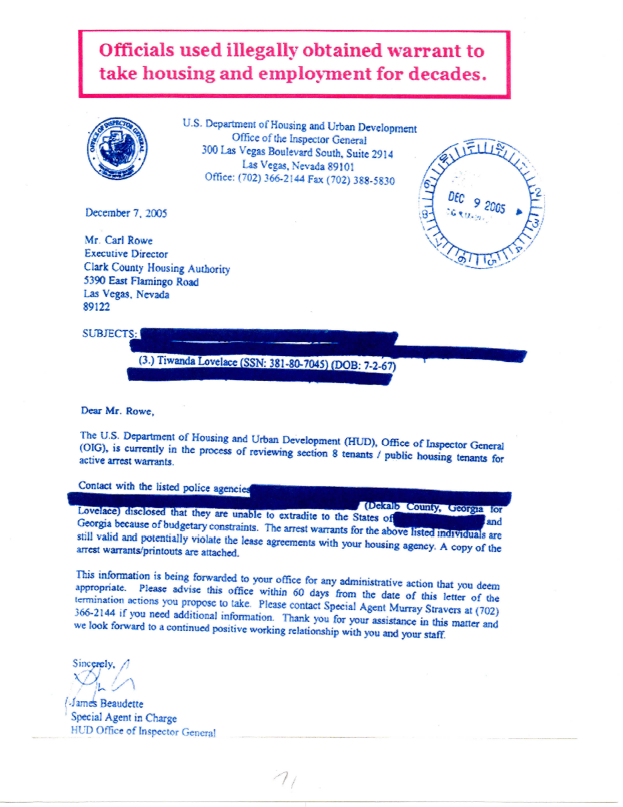 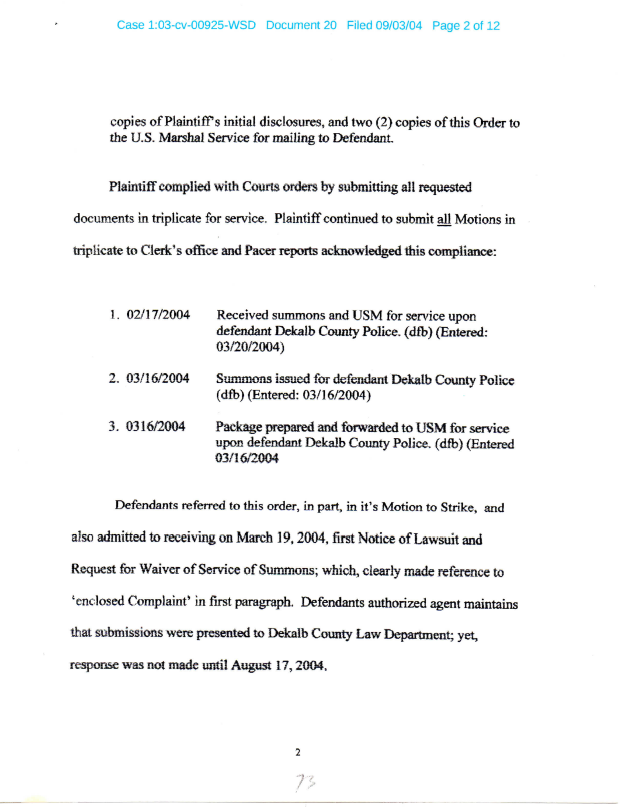 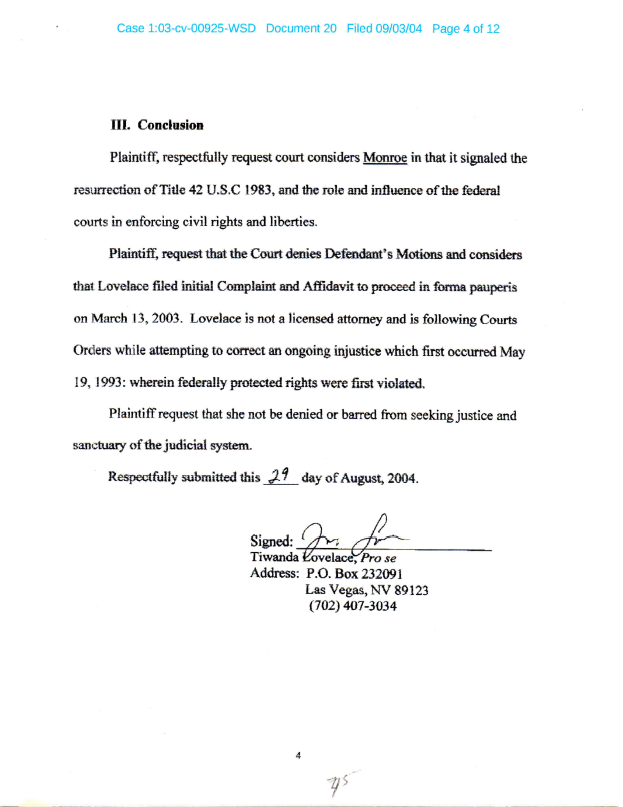 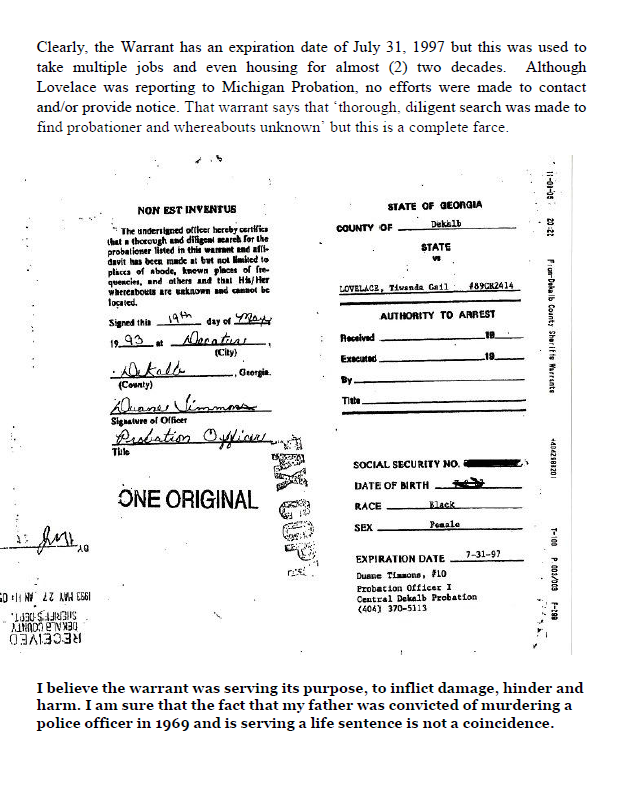 If a Plaintiff submits the (4) four Required BOUND copies to the Courts Clerk, why would they require an unbound copy?

This should have been stamped and assigned a docket # at time of submission, per Court Rules…

This video clearly shows clerk’s misconduct when receiving Judicial Complaint of Misconduct. Afterward, the executive clerk requested unbound copies although video shows that I submitted (4) bound copies. I provided 82 pages which included clear, undeniable proof of misconduct but the ruling stated that I did not provide supporting documentation. When I requested a cover sheet because the initial clerk only provided a generic date stamp, the executive clerk gave me a copy which was completely different from the generic stamp and it included the case docket number but it did not reflect that it came from my bound copies. The ruling still never addresses that the courts ignored clerks were supposed to serve Defendants.

Keep in mind that the reason for the filing of the COMPLAINT OF MISCONDUCT was due to this same kind of ‘switch-a-roo‘ and  obstruction.

When reviewing the (80+) eighty plus pages above, even a child can see that this is more than a substantial amount of evidence so how can it be said that there is no evidence to support…unless – not given the complete bound 80+ page filings.

This is the video that was taken just prior to driving to Courthouse. It shows the actual Complaint with highlighting some of the proof. It clearly shows ‘book-like’ over 80 pages which demonstrates every allegation (some of which was captured on camera.

I also have video footage of the clerk stamping the submissions but not assigning docket number.

COA CLERK DID NOT FOLLOW PROCEDURE because there was no docket number assigned and the stamp used was not initialed. In fact, when I question him about the Docket #…

Kennerly gave me the copy of the first page that was stamped with different stamp and it was initialed as it should have been when filed. When I met with Kennerly to give him the requested unbound copy, he provided me with a copy of the first page of the C.O.M. with a Docket # (finally) but it was nothing like the copy that the courts initially returned.

The video is really scratchy and long but just a little past half way, you will hear and see clerk receives all copies but only stamps my copy and one. Clearly tells me that she will stamp one copy and ‘they’ will send me a docket number later or next week.

I will upload after I cut to specifics…soon!

Shortly afterward, the Chief Judge rules that ‘there was no supporting evidence…’ as if he did not receive a copy of the 80+ pages (listed above). The Chief Judge Ed Carnes, never addressed the proof that the Courts ignored that the Clerks duty to process Service.

DID YOU SEE THOSE 80+ PAGES OF CLEAR PROOF OF JUDICIAL MISCONDUCT?

I have the letter with all of the names included but I’m sure that there is a reason that they sent a redacted copy along with the standard letter.

It’s funny that they will enforce the laws for their own purposes and cover ups but god forbid that you want to have your rights enforced against the powerful.

BY THE WAY, THEIR STAMPS ARE SQUARE WITH NAMES AND INITIALS..